After persuading King Obould to withdraw some of the Orcish armies attacking the Dwarves of Thorbardin, the adventuring party had explored the ruined Irda (High Ogre) city of Vantal. It then defeated a Drider, an arachnoid servant of Lolth, before meeting with Dwarves on giant owls and Elves on great eagles.

The diplomats and scouts fly back toward the Kharolis Mountains. On the Plains of Dust, they see some of the hordes of Orcs returning to their homeland. However, Drow, giants, Driders, and even dragons have joined the siege.

Perogen and Rowan note that some of the chromatic and even metallic dragons are fighting among themselves, so they hang back as their companions head straight for Thorbardin.

The Wizard and Bard attend to a wounded gold dragon at the battle’s edge. The drake says that his “lord Paladine bade us to work with some of our chromatic kin to repel the newcomers to this world. Some of our youths — particularly red and green dragons — have been seduced by Lolth….”

Perogen and Rowan also see Clerics of Takhisis riding black, blue, and white dragons. The ancient gold thanks them by breathing a Blessing on them and then flies off to fight a young red dragon.

Meanwhile, Sam and Maddie maneuver to assess the tactics around the siege of Thorbardin. They see aerial cavalry consisting of Dwarves riding metallic dragons. 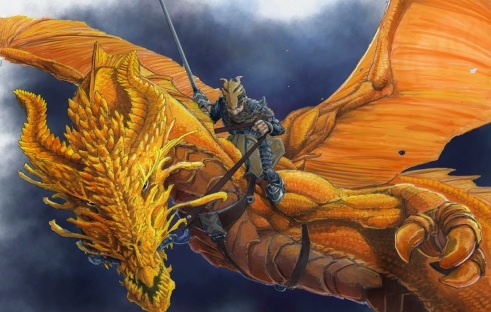 Cal, Redrik, and Santiddio land within the city’s battlements and are greeted by Shadowfox. They notice that the chief scout is acting strangely, so Cal casts Protection From Evil.

The others regroup, and Rowan joins with a Countersong.Shadowfox is angry to realize that Dark Elf prisoner Meandrea has tampered with his mind. Cal, Redrik, and Rowan go with him to report to King Ivor Stoneaxe as planned.

Sam, Maddie, Santiddio, and Perogen head with two elite Dwarven scouts to the dungeon. They find the guards there similarly ensorcelled and all the cell doors open. Meandrea says she has been waiting for them.

Perogen casts Fireball, but the Drow deflects his spell. Rogue Santiddio draws his rapier and dagger but swings wide, and Barbarian Maddie rages and strikes the Sorceress.

Meandrea casts, but Perogen counters. The infiltrator then poisons Maddie. Ranger Sam and his snow leopard Minerva both miss, as does Santiddio again. Maddie falls unconscious, and Meandrea summons a diabolical winged figure with a flaming whip. She taunts the would-be heroes, telling them to run.

The male Erinyes strikes Sam with a whip of Entanglement, and Perogen uses Expeditious Retreat to go warn the others. Santiddio drags Maddie out of the chamber, as Sam provides cover, leaving four explosive arrows wedged in the floor.

Santiddio slashes at the whip holding Sam. Rowan gives an Inspiring Word to the Ranger and casts Heroism on himself, Sam, and Cal. The infernal Erinyes uses his whip to burn Sam, who manages to break free.

Cleric Redrik revives Maddie, who swings her axe at the Erinyes, misses, and again rages. Meandrea chants and opens a portal to the nether planes. She also turns the prisoners slain by Perogen’s Fireball and the fallen guards into zombies.

Seven zombies fight the remaining Dwarven sentries, and five collapse, thanks to invisible faerie dragon Itchum. Perogen yells to the Dwarves to fall back, but his Frostbite fails to affect the Erinyes or the Drow.

Paladin Cal casts Sanctuary on Sam. Cleric Redrik attends to Sam’s wounds as the Dwarves draw Holy Avengers and close on the Erinyes. Half-Elf Santiddio hits the monster twice before disengaging to draw his bow.

Fellow Half-Elf Rowan draws his sword and casts Sound Burst, destroying eight zombies. Sam throws a net at the Erinyes, briefly entangling him. Feline Minerva pounces on the Dark Elf but misses her.

Canine plainswoman Maddie strikes the Erinyes but misses Meandrea, who heals the devil and wounds Cal. Perogen runs around the melee and takes control of some of the zombies. He commands the Undead to drag the Drow out of the room.

Sylvan Elf Cal invokes his patron Kiri-Jolith, god of valor, as he Channels Divinity and smites Meandrea. She cuts him with a poisoned blade. Santiddio shoots arrows, misses, and maneuvers.

Rowan gives Santiddio an Inspiring Word and aids Maddie against the Erinyes. The Erinyes gets free from Sam’s net and hits Rowan. Sam asks Redrik to borrow his crossbow and fires at the witch. Maddie also lands a heavy blow.

Meandrea uses Mass Suggest to get Redrik, Maddie, and Perogen to drop their weapons. She also hides behind three Mirror Images. Perogen lobs Magic Missiles to deal with them, plus Chill Touch, and Cal manages to hit his foe despite being weakened by poison.

Redrik hurls a vial of the Light of Paladine at the gate, ending Meandrea’s summoning. The Dwarven guards hit the Erinyes, as Santiddio notices glyphs and a circle etched into the walls and floor of the Drow’s cell.

Rowan casts Healing Word on himself and grabs Maddie’s dropped axe. The bleeding but lawful Erinyes yields to the Dwarves and complies with their order to leave the plane.

Meandrea swings her Mace of Contagion, but Perogen casts Blindness on her as he notes that her minions are dwindling since he controls the remaining zombies.

Cal Lay on Hands to keep himself in the fight, and Redrik heals Santiddio. Cal finishes off Meandrea with swift sword strikes, but she says, “Death is not the end.” Redrik pours the Tears of Paladine on her oozing wounds.

Perogen identifies the dead Drow’s explosive runes and summoning circle, and Rowan casts Dispel and Shatter to disable them. The Dark Elf and zombies dissolve, and the Dwarves take her mace and their wounded.

King Ivor later thanks the heroes for helping to stop an attack from within Thorbardin’s stout stone walls. However, Cal and company are worried when they learn that the Elves of Qualinost are also under attack….

Thanks, Dexter, for a mostly fun fantasy miniseries! I know it was a challenge to combine AD&D2 settings, a D&D4e/“Next” module, and numerous D&D5e characters. I look forward to helping you rebuild your world, as well as to our eventual return to the “Vanished Lands!” -Gene