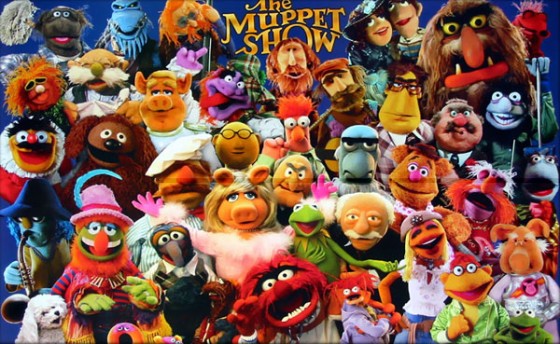 It’s time to meet the Muppets!

I’ve been a fan of the late Jim Henson‘s creations since watching Sesame Street and the original Muppet Show as a child in the 1970s. Henson’s gentle humor didn’t talk down to children, nor was he afraid of including adult jokes that sailed over the heads of then-innocent younger audiences.

Janice has an Animal puppet, and I have a Kermit the Frog — both from before we met. We’ve attended exhibitions of Henson’s work at the Smithsonian Institution and other museums, and we met his widow and son Brian, among other puppeteers. Henson’s gifts of joy and wonder have continued to appeal for generations, but is The Muppets as entertaining as its predecessors? Also, are we able to enjoy our foam and felt friends as we once did?

The good news is that director James Bobin and actor and co-writer Jason Segal have made a strong effort to be faithful to Henson’s spirit and to keep the Muppets as wacky as ever. The Muppets is filled with celebrity cameos, allows us to revisit familiar characters and songs, and should be fast-paced enough for the children of original fans.

The movie follows brothers Gary (Segal) and Walter (voiced by Peter Linz) as they grow up and eventually visit the dilapidated Muppet Studios. Walter uncovers a plot by evil oil baron Tex Richman (Chris Cooper) to buy and tear down the Muppets’ former digs, so Gary drags his girlfriend Mary (Amy Adams) along for the ride to reunite the Muppets and hold a telethon to save the theater.

Segal’s love for the Muppets is apparent, and Oscar nominee (and future Lois Lane) Adams’ talents, first seen in Enchanted, are put to good use for various songs. The bucolic Smalltown is nicely contrasted with the Muppets’ latest road trip and the glamorous yet seedy Los Angeles. Cooper is surprisingly game as the villain, even breaking into a rap number, and Rashida Jones is an impatient studio executive.

With iconic characters such as Superman, Mickey Mouse, and Bugs Bunny, their supporting casts grow over the decades and often overshadow them, so I was glad to see the focus back on Kermit in this year’s Muppets. Gonzo, Rizzo the Rat, and Pepe the Prawn are all present, but not dominant. I miss Henson as the voice of the friendly frog, but there were numerous visual cues to his ensemble variety show (one of the best, along with The Carol Burnett Show).

At the same time, I understand why Frank Oz — the original voice of Miss Piggy, Yoda, and many more — chose to step away from this production. I think the filmmakers tried to honor Henson’s idealism, but they were a bit down on the franchise, saying, “It has been years since we were together in the public eye,” even though Disney and Henson Studios have put out several Muppet movies.

There were a few times in The Muppets when Kermit seemed even more discouraged or Miss Piggy was even more of a diva than usual, but I think they were balanced out by the overall sweetness of the script and live-action supporting cast. To me, the moments that felt true included a barbershop quartet singing Nirvana’s “Smells Like Teen Spirit” and chickens clucking Cee Lo Green’s “Forget You.”

We also saw The Muppet Show‘s opening credits from a new angle, Animal in anger management therapy, as well as old favorites such as “Rainbow Connection.” Overall, I’d recommend The Muppets to anyone who’s still a kid at heart. (The recent comic books weren’t bad, either.) The movie is rated PG-13 for humor and slapstick, and I’d give The Muppets a B+, a 7.5 out of 10, or about three out of five stars. I’m glad I was able to see the film with fellow fans.

My favorite Muppet movies are The Muppet Movie, Muppet Christmas Carol, and Muppets From Space (I’d put The Muppets on par with the last one). I’m less fond of The Great Muppet Caper, The Muppets Take Manhattan, and Muppet Treasure Island. There are also several fun holiday specials — I’m partial to Emmet Otter’s Jug Band — and other TV shows, such as Fraggle Rock and The Storyteller.

Like Segal and company, I’m not sure that many children with their noses in videogames or being shuttled from soccer to dance practice and homework will appreciate The Muppets, but as with classic Star Trek, I think it’s worth making an effort to expose them to Henson’s humanist values of playful curiosity, determination in the face of adversity, and most importantly, kindness and acceptance of all.

Despite an untimely death, Jim Henson left a legacy of family-friendly entertainment as well as more mythic material, such as Labyrinth, The Dark Crystal, and Farscape. I’ve got posters of the Muppets and Farscape cast on my bedroom walls, “It’s Not Easy Being Green” on my lips, and a little bit of Henson in my heart.

One thought on “Death and humanism, Part 2: The Muppets”