In one ancient world, there was a region where strange majicks and demihuman races thrived. The “Vanished Lands” were blessed by the gods and cursed by prophecy. Travelers became adventurers, and adventurers strove to be heroes in the face of many perils and wonders.

Various groups of mercenaries and diplomats have fought humanoids in the northwestern borderlands, encountered pirates on the Sea of Nagendwa, and wandered the hostile Halmed Desert and the wide Plains of Sathendo….

“12 to 13 March 1227 B.C.E.:” After resting at a temple of Brijitt, the explorers met an Atlantean agent and entered barbaric Gisar’s sewers. They avoided a Draconian patrol and scouted the ruins beneath the House of Xia. The group magically jumped to a room with a vampire and a banshee and narrowly defeated them before debating what to do next in Tempestade’s quest.

Giacomo, Tempestade, and Rhys recommend pressing on while they still have the element of surprise and while Gregor Kratakis, the Atlantean member of the Order of the Golden Lion, creates a diversion on the surface.

Scully, Corwin, and Elsa, however, prefer to rest to recover arcane and divine spells. They argue that since they have defeated Count Radescu and Lady Leafcutter, at least one chamber is relatively secure.

Two humans wearing spiral amulets of Krakas, lord of the maelstrom, knock on the door. Giacomo dons a Robe of Blending to pose as the count, and Corwin puts on a Hat of Disguise to appear as the Undead Dark Elf. The Wizard casts Comprehend Languages, and the Bard casts Know the Words.

They crack open the door and haughtily tell the patrol to go away and leave them alone. Ranger Scully blends in with the dungeon’s humanoid denizens, but martial artist Tempestade uses his Boots of Spider Climb to stay out of sight near the ceiling.

Similarly, Druid Elsa Wild Shapes into insect form, and Tinker Gnome Rhys hides beneath a bed. The cultists leave, and the group sets watches so the spellcasters can sleep. Rhys studies Scully’s hollow-point arrows to adapt for his crossbow bolts.

On the second watch, Tempestade sees a ghostly figure pass through a wall. He talks with Elleron, who was once a scribe in Gisar’s Magisterium (magic school/library). Tempestade knocks a book out of the ghostly librarian’s hands, and Elleron casts Detect Good and notices the Barbari human’s companions.

The Spectre reaches out to Tempestade, who fights defensively and ripostes. The Monk wakes up Neutral Rhys, who doesn’t see the spirit and is fascinated by the open tome on the floor. Owlicious, Scully’s owl companion, is nervous and rouses the Gnoll.

Rhys tries to share the book with Hill Dwarf Elsa, who Channels Positive Energy, healing Tempestade and briefly warding off Elleron. The Undead scribe touches Elsa with icy fingers, and Half-Elf Corwin is annoyed at being awakened.

Scully ends the fracas with an arrow filled with holy water, and Giacomo and Elsa carefully wrap up the book, returning Rhys to his senses. Tempestade resumes watch with Gerald, Giacomo’s homunculus familiar.

A little while later, Gus the Gargoyle knocks on the door to invite Count Radescu and Lady Leafcutter to a special meal. He explains that a rare Atlantean human has been captured. Scully and Tempestade realize that Gregor needs rescuing.

Still disguised, Corwin and Giacomo tell the stone-skinned monster to bring the prisoner to them. Shortly thereafter, two acolytes of Krakas bring the trussed-up Rogue to the subterranean room.

Priestess Elsa casts Silence on a coin to limit enemy spellcasting. Sniper Scully shoots an arrow at the Gargoyle, and Giacomo smacks a cultist with his staff. The arcanist sends Gerald to untie the battered Atlantean.

Swashbuckler Corwin draws his sword and dagger, and gadgeteer Rhys fires his crossbow at Gus. One cultist runs away, and Tempestade chases after him. The Gargoyle strikes Giacomo, who slays the other cultist with Magic Missiles.

Elsa Wild Shapes into dire bear form and smashes the Gargoyle, and the rest of the group quickly searches the bodies. They find banded armor, restorative ointment, and a Folding Boat.

Meanwhile, Tempestade runs after one acolyte into an intersection of tunnels. He sees four statues and runs past them to lead them away from his friends. Unfortunately, a heavy door at the end of one hallway is locked, and a clockwork golem turns and grabs the time-displaced capoeirista!

The rest of “Vistel’s Expedition” catches up and sees the four constructs. A stone golem reaches for Corwin, and another slips when trying to grab Giacomo. One of the two clockwork humanoids continues trying to choke Tempestade.

Wily Giacomo casts Ray of Enfeeblement on a stone golem, and clever Rhys aims for the symbol on the forehead of one of the animated statues but hits himself instead. Determined Scully casts Rock to Mud on one of Giacomo’s foes, weakening it.

Prince Corwin uses a wand of Dispel Magic, but it has no effect on the tough golems. Nimble Tempestade invokes Otih, god of the sun and justice, to heal himself and break free. Pious Elsa calls upon Vulkan (Moradin) and summons a stone giant.

Six more followers of Krakas arrive from side passages and begin casting. Rhys is briefly lost in a vision of being in an icy hell. Giacomo uses Force Manipulationto create a barrier, slowing some of the clergy of chaos.

The stone golems trade mighty blows with the giant, and the clockwork creature weakened by Giacomo hits itself. Corwin blasts Tempestade’s opponent, which explodes, wounding both of them and Giacomo.

Elsa calls for the adventurers to head to the “Joining of the Ways,” the obelisk they plan to use to help Tempestade get back to his distant homeland. Rhys eventually breaks free of the illusion and falls back, ordering his own constructs to help hold off the cultists.

Giacomo drops two of the robed men with more Magic Missiles, as Scully looses volleys of arrows. Tempestade takes the lead toward the obelisk, and around a corner, he runs into a Gelatinous Cube!

Tempestade is paralyzed and burned by the aberration’s digestive acids, which also destroy his Boots of Spider Climb. Elsa casts Wall of Fire, and Scully casts Resist Elements — Fire on Tempestade.

The giant summoned by Elsa manages to hold off the three remaining golems, as the surviving cultists advance. An evil priest reanimates the dead worshippers of Krakas. Giacomo fells two more with Magic Missiles, while Rhys shoots wide.

Corwin takes the lead, following a map from the “Seekers of Lore,” a previous band of would-be heroes. Elsa casts River of Wind, forcing the Gelatinuous Cube through the Wall of Fire to free Tempestade, who is still paralyzed.

Scully grabs Tempestade and Gregor and runs toward the Joining of the Ways. Elsa again Channels Positive Energy to heal her companions. The spelunkers meet four Draconians from the temple of Tiamat.

Dulac the Denier, a gold-scaled Aurak, asks “Lady Leafcutter” and “Count Radescu” what took them so long. He says they should sacrifice the Atlantean so the feast can begin.

Scully ties Gregor loosely to the obelisk while the others pretend to go along with the ritual. Instead, Giacomo, Tempestade, Corwin, and Elsa read aloud from each side of the monolith. The carvings are in Celestial, Draconic, Infernal, and Quelanthi (High Elven). 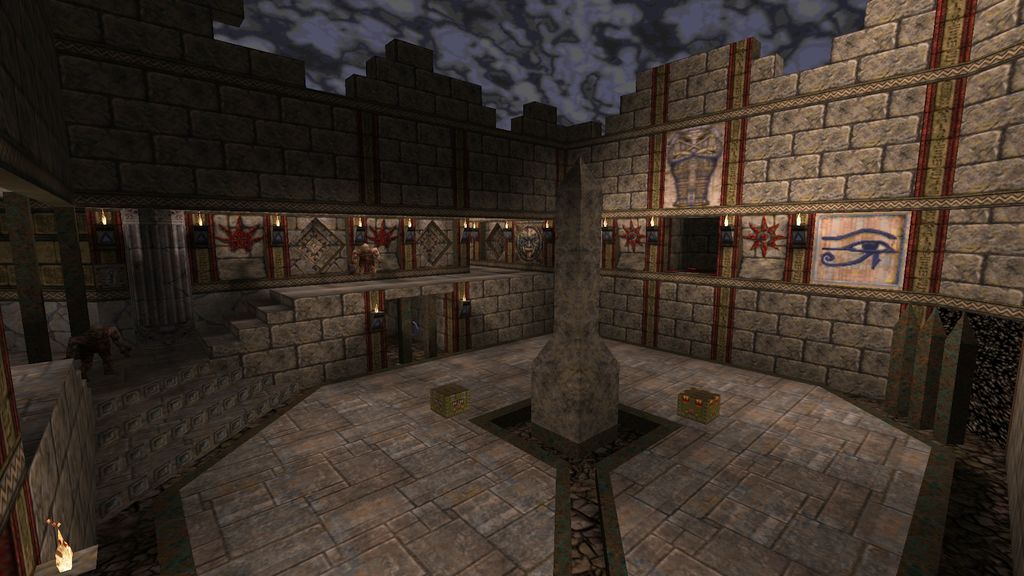 Before more followers of Krakas can arrive or the Draconians realize what’s really happening, the obelisk glows brightly. Gregor begins to tell Scully, “You have regards from…” and the chamber disappears. The adventuring party is briefly disoriented and nauseated.

The onetime circus performers land in a jungle, which reminds them of the Zarendo Islands but smells and sounds different. The oppressive heat and humidity weigh upon them. Giacomo hears distant bells and verifies that his cursed tattoo of the “Mad Mage” Ezra hasn’t taken control of him again.

Scully notices that someone familiar has joined them in traveling through time and space [see Byron V.O.’s upcoming cameo]. Corwin would have preferred a different way to leave Gisar, where Hamfast is still carousing.

Elsa casts Speak With Animals and learns from a toucan that they are in the Brazilian state of Mina Gerais. Rhys is curious about sounds of machinery. Tempestade hopes to free fellow slaves from his former plantation and return with them to the “Vanished Lands”….

I hope that everyone has enjoyed our old-school scenarios, and we’ll keep on refining our house rules. I also look forward to seeing you during Byron V.O.’s visit to the Boston area this coming weekend!