In one ancient world, there was a region where strange majicks and demihuman races thrived. The “Vanished Lands” were blessed by the gods and cursed by prophecy. Travelers became adventurers, and adventurers strove to be heroes in the face of many perils and wonders.

Various groups of mercenaries and diplomats have fought humanoids in the northwestern borderlands, encountered pirates on the Sea of Nagendwa, and wandered the hostile Halmed Desert and the wide Plains of Sathendo….

“11 to 18 January 1227 B.C.E.:” The wanderers continued their inquiries into time travel at Falit’s towers of sorcery and the Dhao Soukh. After a successful performance at the caliph’s palace, Corwin followed an alluring woman and was poisoned.

Giacomo isn’t surprised at the Saganim (proto-Celtic) prince’s proclivities and perils. Hamfast keeps a casual watch, while Scully throws cold water in Corwin’s face, helping him regain his senses. The Bard tells the Ranger that the courtesan isn’t worth pursuing.

Elsa has young guide Salim take her to the bazaar, where she commissions marionettes of herself and former Owlbear companion Oswald. The Hill Dwarf buys wine to present to Tarzu, a Djinni who might help Tempestade find his way home.

The next morning, the onetime circus performers go to the Tower of Wind, where they meet Tanaz Srinivasan, a wise Shedu Medjai (winged leonine summoner). She takes them up round ramps to meet Tarzu, who is blue and mostly friendly.

Tarzu accepts Elsa’s gift of wine and tells Tempestade that there are dimensional portals scattered across the “Vanished Lands.” The Djinni agrees to explain how to use an obelisk in the barbaric port of Gisar, but only if the group vows to free an Efreet (fire spirit) from a diabolic temple in the Zarendo Islands.

Corwin asks for time to consider Tarzu’s offer, and the adventuring party returns to the Tower of Sight. After getting past the eyeball-lined walls and a grumpy Beholder janitor, the visitors offer dinars (gold pieces) in return for more information from blind seeress Lydia.

She confirms that a Pit Fiend controls a temple formerly dedicated to the Elemental Plane of Fire on Mount Tilefa, an active volcano on Salhonif Island. Lydia also says that Tarzu is a being of his word.

According to Lydia, Queen Zapanga in the city-state of Selifa might be helpful, but the many tribes of the jungle archipelago are diverse, from devil-worshipping cannibals and Reptile Folk to relatively peaceful humans.

Giacomo recalls that “Valoren,” a man who knows about dimensional travel, may be found at the port of Laguro on Bokor Island, which is on the way to Selifa and Gisar. However, the western islands are ruled by Artaxis and Zineida, two black dragons.

The team scatters before its next audience with Tarzu. Hamfast visits taverns in the soukh, where the Zedu human Fighter’s formidable appearance as a foreigner wins him free drinks.

Mage Giacomo asks Darius Gaspar whether Vizier Govar al Sarseh was angry with them, but the Rangsten Sha’ir (Halfling Wizard) says that the caliph’s aide is usually worried about affairs of state. Giacomo also begins the taxing Summon Familiar ritual.

Ranger Scully tries to avoid Anpur (jackal men), but she attracts the attention of Dunewalker “Kemosh-ket” [Byron V.O./Non-Player Character]. The Kahin (Druid) is fascinated by the albino Gnoll and says that they are among the few civilized canines in the Halmed Desert. Kemosh offers to show Scully how to track Undead. 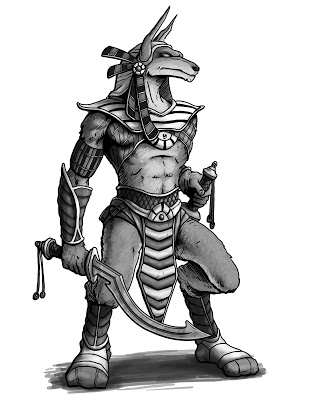 Tempestade visits various temples in his search for allies against evil and meets Elsa and Sir Torrel at the temple of Ishmas. Sister Jamilah introduces the trio to Mother Bakhret. The priestess gives Druid Elsa a Philter of Time, which provides guidance for dimensional travel.

Bakhret also agrees to place a holy protection on Sir Torrel’s shield, since his and Tempestade’s patron, Otih, lord of the sun and justice, is complementary to Ishmas, matron of magic. A green ankh is painted on the shield, repelling Undead (DC 14, rounds/level/day).

Hamfast is urged by children and drunkards to show off, so he slams his shoulder into a tavern wall, destroying some of the mud bricks. Hamfast catches a would-be pickpocket while paying the barkeep for the damage. He then decides to go look for his companions.

Corwin brings rare chocolates to a private audience with Tarzu. The Djinni admits that the Efreet, Lady Shadira, is a kinswoman. Tarzu says that the Pit Fiend trades in souls and has spies and prisoners hidden in alternate forms around Salhonif Island. An item of True Sight would be useful, he adds.

While comparing notes at dinner, Giacomo’s associates are unnerved when a Homunculus offers to serve them. Apparently, the Wizard’s Summon Familiar spell imbued one of his patchwork leather puppets with a spirit. “Gerald” is friendly, but Sir Torrel and others want nothing to do with him.

Hamfast is loath to travel through time, even if it is to rescue Tempestade’s fellow slaves from their Brazilian plantation. He plans to follow up on Vanaka (Dune Dwarf) Dorf Sandblaster’s recommendation of Antar the Black, captain of the Ghul’s Breath, as an alternative to Sea Elf Capt. Scarlet and the Foamrunner.

Scully mentions how she has met Kemosh, and Elsa teases her that Wolfen “Niac” [Mike F./N.P.C.] would be jealous. Corwin shares what he has learned about the Zarendo Islands, and Sir Torrel still hopes to meet more holy warriors. The Paladin is eager to confront the monsters at Mount Tilefa.

The former members of Vistel’s Circus agree to help Tarzu in return for information on the obelisk in Gisar. As Lydia predicted, the Djinni needs merely their word to give them the instructions. Lady Shadira can be freed if the object binding her is found and destroyed.

To activate the obelisk, each side must be read aloud simultaneously from top to bottom, the Djinni says. According to notes from the “Seekers of Lore” in Thadenis’ Harandrim Academy, the carvings are in Celestial, Draconic, Infernal, and Quelanthi (High Elven).

Giacomo recuperates from his ritual, and Elsa spends 150 dinar (g.p.) on aBanuq (winged cat) she names “Penryn.” The travelers rest and and train before their next voyage….

I’m glad that we were able to meet, despite recent snowstorms. Don’t forget to level up your P.C.s. By now, you may also have seen my mostly favorable review of The Hobbit [Part 2 of 3]: the Desolation of Smaug, and the “Vanished Lands: A New Dawn” telecom game should resume next Sunday. We’ll see whether “Vistel’s Circus” is able to meet on Dec. 30.

In the meantime, I look forward to wrapping up Jason E.R.’s “Star Wars: Dark Times” miniseries in advance of our return to his “Glassworks” superhero setting. I hope that all of your holidays are happy!